Human dignity must be respected from the moment of conception until natural death, Pope Francis said on Friday.

Addressing a plenary session of the Congregation for the Doctrine of the Faith, Pope Francis underlined three keywords, dignity, discernment, and faith.

Archbishop of Malta Charles Scicluna was among those present at the plenary session at the Clementine Hall in the Vatican. Since November 2018 Mgr Scicluna has served as Adjunct Secretary of the Congregation for the Doctrine of the Faith, the curial body responsible for doctrinal matters, also dealing with clerical sexual abuse cases on minors.

Quoting his seminal encyclical ‘Fratelli Tutti’, the Pontiff said “it is my desire that, in this our time, by acknowledging the dignity of each human person, we can contribute to the rebirth of a universal aspiration to fraternity.”

He added that this was especially relevant to today’s world, “marked by so many social, political and even health tensions, in which there is an ever-growing the temptation to consider others as strangers or enemies, denying them their dignity.”

Pope Francis added that respecting human dignity from conception to death, is “an indispensable prerequisite for the protection of personal and social existence, and also the necessary condition for fraternity and social friendship to be realised among all the people of the world.”

Noting that the Church, from the very beginning of its mission, has always proclaimed and promoted the intangible value of human dignity, Pope Francis said that “man is indeed the masterpiece of creation: he is wanted and loved by God as a partner of his eternal plans, and for man’s salvation Jesus gave his life to the point of dying on the cross for every man, for each of us.”

Stressing the need for discernment in modern life, Pope Francis said the exercise of discernment finds a necessary application in the fight against abuses of all kinds.

“The Church, with God’s help, is resolutely pursuing its commitment to bring justice to the victims of abuse by clergy members, applying with particular care and rigour the prescribed canonical legislation. In this light, I have recently updated the norms on crimes reserved to the Congregation for the Doctrine of the Faith, with the aim of making judicial action more effective. This alone cannot suffice to stem the phenomenon, but it is a necessary step towards re-establishing justice, addressing the scandal and emending the offender.”

Discernment was also key to the ongoing Synod of Bishops, the Pontiff said. “Some may think that the synodal path is to listen to everyone, make an inquiry and give results,” the Pope said.

Touching on the last word he highlighted, Pope Francis said the Congregation is not only entrusted to defend but also to promote faith.

“Without faith, the presence of believers in the world would be reduced to that of a humanitarian agency. Faith must be at the heart of the life and action of every baptised person,” the Pontiff said. 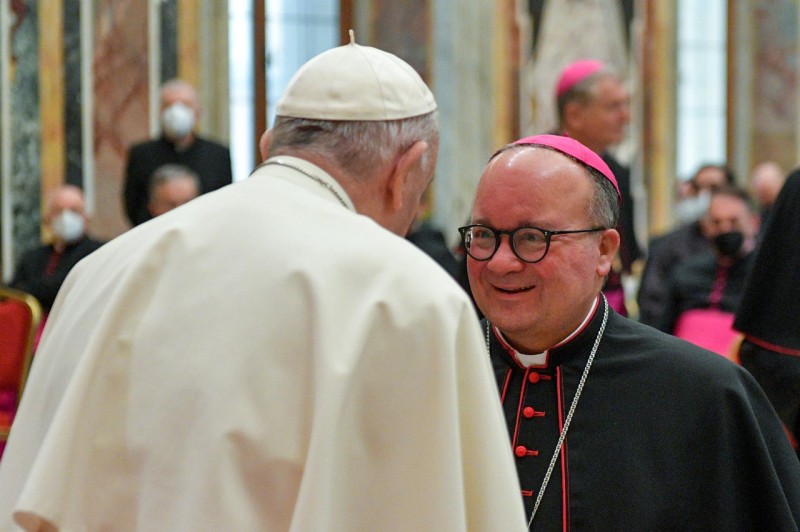