How can Pope Francis get closer to believers scattered around the planet at a moment of grave danger? This is a question that the Pope undoubtedly reflected upon when the coronavirus began its rapid spread around Italy and the globe.

The answer does not consist in live-streaming Mass so that everyone can follow him through the Internet, even though he is in fact doing that each morning.

In fact, “following” the celebration of Mass through the media, theologically speaking, is not “participating.” There is no such thing as media sacraments. Mass on television cannot replace the sacrament of the Eucharist. If one cannot attend Mass, watching a televised Mass can be a great spiritual help, but the viewer doesn’t participate in the sacrament.

What, then, can the pope do to make himself actively present in the life of each member of the faithful? There’s a unique act he can perform: the papal blessing Urbi et Orbi, which translates from Latin “to the city [of Rome] and to the world.”

It’s an act which no other bishop can perform, and which — in contrast to the Mass — can take place effectively through the media, for the good of the souls of the faithful.

The Vatican determined some decades ago that those who receive the pope’s Urbi et Orbi blessing through a live broadcast are eligible to receive its blessing, just as those physically present in St. Peter’s Square.

Normally, the pope only imparts the “Urbi et Orbi” blessing on three occasions: when he is elected Successor of Peter, at Christmas, and at Easter.

We can say that never before in history has an Urbi et Orbi blessing been given by a pope all alone in St. Peter’s Square, followed worldwide by believers through the media. It will be a unique historical event.

The blessing “Urbi et Orbi” grants remission for the temporal punishment of sins that are already forgiven; that is, it confers a plenary indulgence under the conditions determined by Canon Law and made explicit by the Catechism of the Church (Nos. 1471-1484).

The conditions for receiving a plenary indulgence are (Cf. The Gift of the Indulgence, by the Apostolic Penitentiary):

During these times of lockdown and quarantine, the Vatican has determined that the 2nd and 3rd of those conditions can be fulfilled when it becomes again possible.

So what’s an indulgence?

According to Catholic theology (Catechism of the Catholic Church, numbers 1422-1498), the guilt of sin is remitted through the Sacrament of Reconciliation (Confession), so that the person is once again in God’s grace and will be saved if he or she does not fall back into mortal sin.

But sin brings disorder into a believer’s life and into the world, which remains after Confession. Though forgiven, there is still a need to rectify this disorder.

The Catechism of the Catholic Church defines an indulgence as “a remission before God of the temporal punishment due to sins whose guilt has already been forgiven” (CCC 1471).

To understand what the term “temporal punishment” means in this context, we need to keep in mind that there is a distinction between receiving God’s forgiveness of our sins and the necessity of contending with our sins’ consequences. Sins are not only the breaking of God’s commandments, but are also a cause of discord in both God’s benevolent ordering of the universe as well as in his providential guidance of our lives. While our sins are truly and fully forgiven in the sacrament of penance, our souls can still suffer the spiritual damage caused by our offenses.

There are several ways we can repair this damage, or “remit the temporal punishment” that our sins deserve. For instance, we can do good works or patiently suffer the trials of life. If we are not able to properly atone for our sins in this way during the course of our time on earth, our souls would ultimately need to be healed and purified through the sufferings of purgatory.

Yet there are some saints who, through their lives of heroic patience and charity, have already done more than enough to ready their own souls for heaven. Because of this, the Church effectively has a surplus of goodness, which is referred to as the “treasury of the Church” (cf. CCC 1467). Given the Church’s doctrine on the communion of saints (the Church’s teaching that all Christians share a deep spiritual bond with each other), it is possible for one Christian’s overabundant merit to be applied to the spiritual healing of another soul still in need of purification. As the Catechism states: “In this wonderful exchange, the holiness of one profits others, well beyond the harm that the sin of one could cause others” (CCC 1465).

We can recall that Christ told St. Peter, “whatever you bind on earth shall be bound in heaven, and whatever you loose on earth shall be loosed in heaven” (Matt. 18:18). Therefore, Catholics believe that the Holy Father, as the successor to St. Peter, has the power to distribute this excess grace to faithful Christians. An indulgence is the act through which this sharing of grace happens.

In other words, since the plenary indulgence completely remits that due penalty, those who die without having fallen back into sin do not need the purification of Purgatory and may enter directly into heaven (cf. Catechism of the Catholic Church, 1030-1032).

According to Tradition, the benefits of the blessing Urbi et Orbi are effective for all those who receive the blessing with faith and devotion, even if they receive it by listening or watching live through mass media. This is precisely the unique gesture of companionship that the pope has chosen to give to every believer at this time.

The English translation of the formula of the Urbi et Orbi blessing, which the pope will pronounce in Latin this Friday at 6pm in Rome.

May the Holy Apostles Peter and Paul, in whose power and authority we trust, intercede for us before the Lord.
℟: Amen.

Through the prayers and merits of Blessed Mary ever Virgin, Saint Michael the Archangel, Saint John the Baptist, the holy apostles Peter and Paul, and all the saints, may Almighty God have mercy on you and forgive all your sins, and may Jesus Christ bring you to everlasting life.
℟: Amen.

May the almighty and merciful Lord grant you indulgence, absolution and the remission of all your sins, a season of true and fruitful penance, a well-disposed heart, amendment of life, the grace and comfort of the Holy Spirit and final perseverance in good works.
℟: Amen.

And may the blessing of Almighty God, the Father, and the Son, and the Holy Spirit, come down on you and remain with you forever.
℟: Amen. 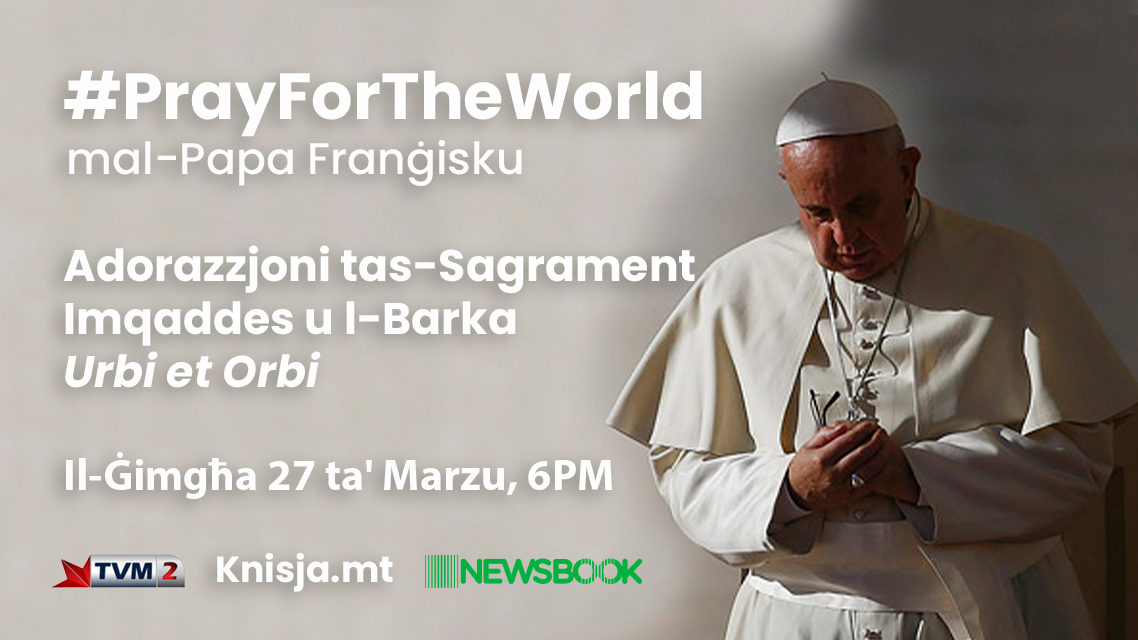