We have travelled this road together, and I thank you for coming from so many different parts of the world and for bringing with you the richness of your beliefs and cultures. Thank you for having taken part so intensely in these days of work, commitment and sharing in the service of dialogue. This is more valuable than ever in challenging times like our own, when the problems of the pandemic have been compounded by the utter folly of war. There are altogether too many cases of hatred and division, too little dialogue and effort to understand others. In our globalized world, this is all the more dangerous and scandalous. Our human family cannot advance if simultaneously united and divided, interconnected and torn apart by massive inequality. Thank you, then, for these efforts to build peace and unity. Our thanks go likewise to the local authorities, who hosted us and organized this Congress with great care, and to the hospitable and courageous people of Kazakhstan, capable of embracing other cultures while at the same time preserving their own noble history and precious traditions. Kiop raqmet! Bolshoe spasibo! Thank you very much!

The motto of my Visit, now drawing to an end, has been “Messengers of Peace and Unity”. It is deliberately in the plural, for all of us are on a common journey. This Seventh Congress, in which we have taken part by the grace of the Almighty, has marked an important step on this shared itinerary. Since its inception in 2003, this event has taken as its model the Day of Prayer for Peace in the World, convened in 2002 in Assisi by John Paul II in order to reaffirm the positive contribution made by the religious traditions to dialogue and to harmony between peoples. After the events of 11 September 2001, it was necessary to respond collectively to the incendiary atmosphere that terrorist violence sought to incite, and which threatened to turn religion into a grounds for conflict. Pseudo-religious terrorism, extremism, radicalism and nationalism, dressed up in religious garb, nonetheless continue to foment fears and concerns about religion. In these days, then, it proved providential that we could come together once more, in order to reaffirm the authentic and inalienable essence of religion.

In this regard, the Declaration of this Seventh Congress states that extremism, radicalism, terrorism and all other incentives to hatred, hostility, violence and war, whatever their motivations or goals, have nothing to do with the authentic spirit of religion and must be rejected in the most decisive terms possible (cf. No. 5). Furthermore, since the Almighty has created all people equal, regardless of their religious, ethnic or social origin, we are agreed that mutual respect and understanding should be considered essential and indispensable in religious teaching (cf. No. 13).

Kazakhstan, at the heart of the great and pivotal continent of Asia, was the natural place for us to meet. Its flag reminded us of the need to maintain a healthy relationship between politics and religion. Indeed, if the golden eagle displayed on that flag speaks of earthly authority and ancient empires, the blue background evokes the colour of the sky and thus transcendence. There is thus a healthy connection between politics and transcendence, a sound form of coexistence that keeps their spheres distinct. Distinct, but not confused or separate. Let us say “no” to their confusion, for the sake of all people, who need, like the eagle, a free sky in which to fly, a free space open to the infinite and not straitened by earthly power. Transcendence, for its part, must not yield to the temptation to turn into power, lest heaven fall to earth, the eternal “beyond” be chained to an earthly present, and love of neighbour become prey to partisan decisions. “No”, then, to confusion between politics and transcendence, but “no” also to their separation, for the highest human aspirations cannot be excluded from public life and relegated solely to the private sphere. Consequently, those who legitimately desire to voice their beliefs must be protected, always and everywhere. Yet how many people are even now persecuted and discriminated against on account of their faith! We have insistently appealed to governments and relevant international organizations to provide assistance to religious groups and ethnic communities whose human rights and fundamental freedoms have been violated, or subjected to violence by extremists and terrorists, also as a result of wars and military conflicts (cf. No. 6). Above all, we must ensure that religious freedom will never be a mere abstraction but a concrete right. We defend everyone’s right to religion, to hope, to beauty: to Heaven. Kazakhstan is, in the words of its national anthem, a “sky of golden sun”, and the same is true of each human being. In their absolute uniqueness, if they are in contact with the divine, every man and woman can radiate a special light in our world.

For this reason, the Catholic Church, which tirelessly proclaims the inviolable dignity of each person, created “in the image of God” (cf. Gen 1:26), also believes in the unity of the human family. The Church believes that all “humanity forms but one community. This is so because all stem from the one stock that God created to people the entire earth, and because all share a common destiny, namely God. His providence, evident goodness and saving designs extend to all mankind” (SECOND VATICAN COUNCIL, Declaration Nostra Aetate, 1). Hence, from the outset of this Congress, the Holy See, particularly through its Dicastery for Interreligious Dialogue, has taken an active part in it. It wishes to continue to do so, for the path of interreligious dialogue is a shared path to peace and for peace; as such, it is necessary and irrevocable. Interreligious dialogue is no longer merely something expedient: it is an urgent-needed and incomparable service to humanity, to the praise and glory of the Creator of all.

Brothers and sisters, in thinking of this shared path, I asked myself: What is our point of convergence? Pope John Paul II, who visited Kazakhstan twenty-one years ago this very month, stated that “for the Church all ways lead to man” and that man is “the way for the Church” (Redemptor Hominis, 14). I would like to say that today man is also the way for all the religions. Yes, man, men and women, concrete human beings, weakened by the pandemic, worn out by war, wounded by indifference! Human beings, frail and marvelous creatures, who, “once God is forgotten, are left in darkness” (SECOND VATICAN COUNCIL, Pastoral Constitution Gaudium et Spes, 36) and apart from others cannot survive! The good of humanity should be taken into consideration ahead of strategic and economic objectives, national, energy and military interests, and in advance of crucial decisions. To make decisions that are truly great, we should look to children, to young people and their future, to the elderly and their wisdom, to ordinary people and their genuine needs. We have spoken out and insisted that the human person cannot be reduced to what he or she produces and earns; that human beings must be accepted and never discarded; that the family, a word that in the Kazakh language means “nest of soul and love”, is the natural and irreplaceable reality that must be protected and promoted, so that tomorrow’s men and women may grow and mature.

For all human beings, the great religious and wisdom traditions are called to testify to the existence of a shared spiritual and moral patrimony, based on two principles: transcendence and fraternity. Transcendence, the Beyond, worship. It is impressive that each day millions and millions of men and women, of different ages, cultures and social conditions, join together in prayer in countless places of worship. This is the hidden force that makes our world move forward. And then fraternity, the other, proximity. For one cannot profess genuine fidelity to the Creator without showing love for his creatures. This is the spirit that pervades the Declaration of our Congress. In concluding, I would like to emphasize three words that it contains.

Let us put into the hands of the young opportunities for education, not weapons of destruction! And let us listen to them, without being afraid to be challenged by their questions. Above all, let us build a world with them in mind!

The first word is a synthesis of everything, the expression of a heartfelt plea, the dream and the goal of our journey: peace! Beybitşilik, mir, peace! Peace is urgently needed, because in our day every military conflict or hotspot of tension and confrontation will necessarily have a baneful “domino effect” and seriously compromise the system of international relations (cf. No. 4). Peace, on the other hand, “is more than the absence of war: it cannot be reduced to the maintenance of the balance of power between opposing forces nor does it arise out of despotic dominion but it is appropriately called ‘the effect of righteousness’” (Gaudium et Spes, 78). Peace is born of fraternity; it grows through the struggle against injustice and inequality; it is built by holding out a hand to others. We, who believe in the Creator of all, must be on the front lines in promoting the growth of peaceful coexistence. We must bear witness to peace, preach peace, implore peace. The Declaration thus exhorts world leaders to put an end to conflicts and bloodshed everywhere, and to abandon aggressive and destructive rhetoric (cf. No. 7). We plead with you, in the name of God and for the good of humanity: work for peace, not weapons! Only by serving the cause of peace, will you make a name for yourselves in the annals of history.

If peace is lacking, it is because care, tender love, the ability to generate life are lacking. Our quest of peace must thus increasingly involve – and here is the second word – women. Because women bestow care and life upon the world: they are themselves a path towards peace. For this reason, we have endorsed the need to defend their dignity and to improve their social status as equal members of the family and of society (cf. No. 23). Women must also be entrusted with greater positions and responsibilities. How many calamitous decisions might have been avoided, had women been directly involved in decision-making! We commit ourselves to ensuring that women are increasingly respected, acknowledged, and involved!

Lastly, the third word: the young. Young people are messengers of peace and unity, in the present and in the future. It is they who, more than anyone else, call for peace and respect for the common home of creation. The ingrained attitudes of domination and exploitation, the hoarding of resources, nationalism, war and carving out spheres of influence shape an older world, which the young reject: a world that has no room for their hopes and dreams. In the same way, harsh and repressive forms of religion belong not to the future but to the past. Mindful of future generations, we have stressed the importance of education, which strengthens mutual acceptance and respectful coexistence among different religions and cultures (cf. No. 21). Let us put into the hands of the young opportunities for education, not weapons of destruction! And let us listen to them, without being afraid to be challenged by their questions. Above all, let us build a world with them in mind!

Brothers and sisters, the people of Kazakhstan, open to tomorrow yet mindful of yesterday’s sufferings, point us, by their extraordinary wealth of religions and cultures, towards the future. They encourage us to create that future without forgetting transcendence and fraternity, worship of the Most High and acceptance of our brothers and sisters. Let us press ahead on this path, walking together on earth as children of heaven, weavers of hope and artisans of concord, heralds of peace and unity! 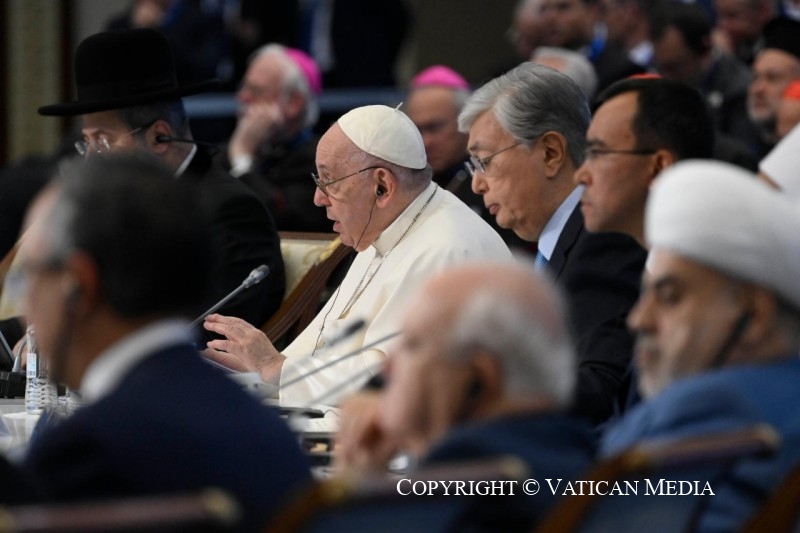