In a letter to an anti-mafia task force, Pope Francis called on them to “free the figure of the Madonna from the influence of criminal organizations.”

“I learned with pleasure that this Pontifical Academy has promoted a conference to officially launch the Department of Analysis and Study of Criminal and Mafia Phenomena,” Francis wrote in a letter sent to Father Stefano Cecchin, president of the Pontifical International Marian Academy.

“I wish to express my appreciation for the important initiative,” the pope wrote.

Cecchin will lead the department, which will include priests, police officials, anti-racketing and anti-usury experts.

The letter will be released in full by Maria con te, a weekly Italian magazine dedicated entirely to the Mother of God. Excerpts of the letter were published in advance by several local news agencies.

“Marian devotion is a religious-cultural heritage to be safeguarded in its original purity, freeing it from superstructures, powers or conditioning that do not meet the evangelical criteria of justice, freedom, honesty and solidarity,” Francis highlighted in the letter, applauding the initiative of the Pontifical International Marian Academy to create the task force.

The scope of the interdisciplinary body is to stop the influence of the underworld on religious events and places dedicated to the Virgin, including the “detours” taken by some Marian processions in southern Italy to salute mafia bosses under house arrest.

Francis sent the letter to Cecchin on August 15, when the Catholic Church marks the feast of the Assumption of Mary.

When speaking of the “Mafia” in Italy, one is referring to an extremely multifaceted reality that seeps into every aspect of everyday life. There are three main branches of organized crime, and all are based in southern Italy: The Camorra crime syndicate in Naples, the ‘Ndrangheta in the Calabria region, and the Sicilian Mafia, frequently referred to by its members as Cosa Nostra.

Cecchin told Maria con te that the new organization will fight the “deviant spirituality” recognizable in several sectors of Italian society, where honoring the Mother of God and mafia godfathers at the same time is normal. The action of the task force, he said, is “linked to the anathema [against the mafia] of John Paul II in Agrigento in 1993 and to that of Pope Francis in Cassano allo Ionico in 2014.”

In May, 1993, John Paul scrapped the prepared text of a speech in Agrigento to deliver a powerful, emotional appeal to the church to stand up to the Mafia. Describing the Cosa Nostra as “a culture of death” and “an enemy of human dignity and civil peace,” he exclaimed, “In the name of Christ, I say to those responsible: Convert! One day you will face the judgment of God!”

“May there be harmony in this land of yours!” he said. “Concord without deaths, without murder, without fear, without threats, without victims! May there be concord! This harmony, this peace to which every people and every human person and every family aspire! After so many times of suffering, you have a right to finally live in peace.”

The saint then added that “those who are guilty of disturbing this peace, those who bear so many human victims on their consciences, must understand, must understand that they’re not allowed to kill innocent people!”

“This people, the Sicilian people, so attached to life, people who love life, who give life, cannot always live under the pressure of an opposing civilization, a civilization of death,” he continued. “We need civilization of life!”

These off-the-cuff remarks at the end of an open-air Mass in which John Paul II demanded Mafiosi convert, change their ways or face the wrath of God’s final judgment, have gone down in Italian church history as a turning point of sorts.

Similarly, during his own trip to southern Italy, during a speech in the valley of Sibari in Calabria, the bastion of the ‘Ndrangheta mafia, Pope Francis said that “evil must be fought, you have to say no. The Church must always work so that good might prevail. Mafiosi are excommunicated, they are not in communion with God.”

In a speech he delivered in 2017, Francis presented a “program” to fight mafia groups and their roots in corruption. The first step was combating politics “bent toward party interests and unclear agreements,” leading to “suffocating the call of conscience, to trivialize evil, to confuse truth with lies and to take advantage of the role of public responsibility that one holds.”

The intersection between organized crime and veneration of the Virgin Mary is hardly confined to Italy.

In Mexico, it’s common to find drug lords with tattoos of Our Lady of Guadalupe; while in Brazil, images of Our Lady of Aparecida can often be found adorning lifelong criminals. 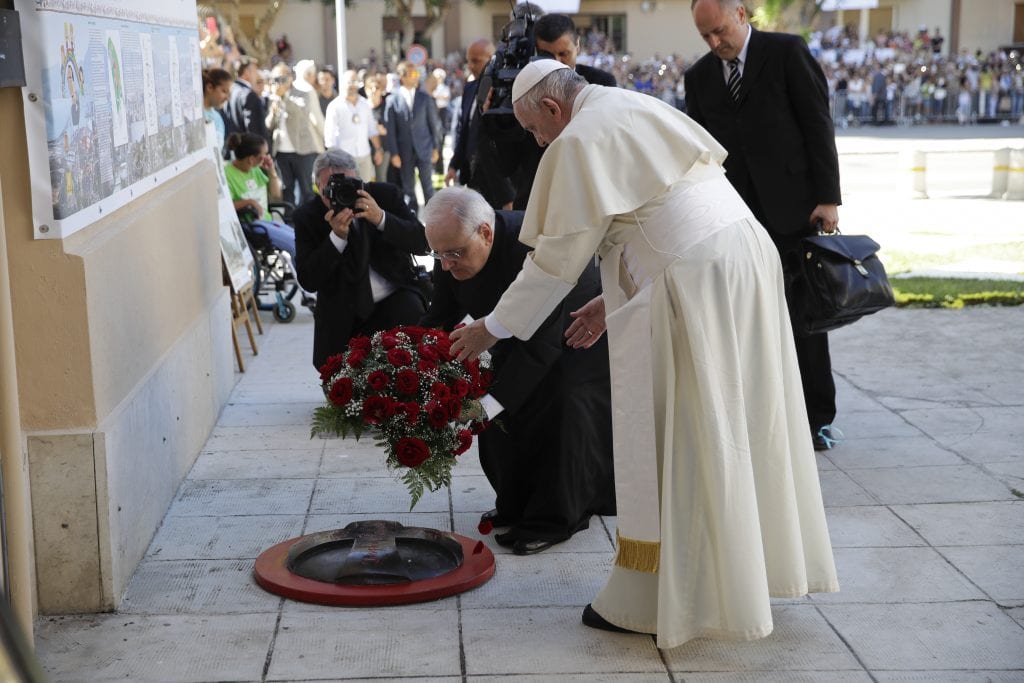