Pope Francis went on Saturday to Assisi for the fifth time during his pontificate. There he signed his new Encyclical Fratelli tutti, before the tomb of St Francis of Assisi, after celebrating Holy Mass.

The Encyclical on fraternity and social friendship was inspired by St Francis, as was the Pope’s second Encyclical, Laudato si’, on the care of our common home, published five years ago.

On hand to greet Pope Francis when he arrived in Assisi at were: the Bishop of Assisi-Nocera Umbra-Gualdo Tadino, Domenico Sorrentino; Cardinal Agostino Vallini, the pontifical legate for the Basilicas of St Francis and St Mary of the Angels in Assisi; the guardian of the Franciscan Friary, also known as the Sacro Convento, Fr Mauro Gambetti; and Father Enzo Fortunato, spokesperson for the Franciscan Friary.

About 20 friars and a few women religious were present for the celebration of Holy Mass which took place in the crypt of the 13th century Basilica which houses St Francis’s remains.

After the proclamation of the Gospel, the Holy Father spent several minutes in silent reflection and then continued the celebration of Mass.

Signing of the Encyclical

At the conclusion of Mass, Pope Francis invited Msgr Paolo Braida to bring the copies of the Encylical to be signed. He then explained that Msgr Braida handles the translations in the First Section of the Secretariat of State. “He oversees everything”, the Pope continued. “This is why I wanted him to be present here, today, and that he should bring the Encyclical to me”.

“I am doing this as a sign of gratitude to the entire First Section of the Secretariat of State who worked on the translations”.

At the end of Mass, Pope Francis briefly visited the Franciscan community in the Sacro Convento monastery attached to the Basilica. 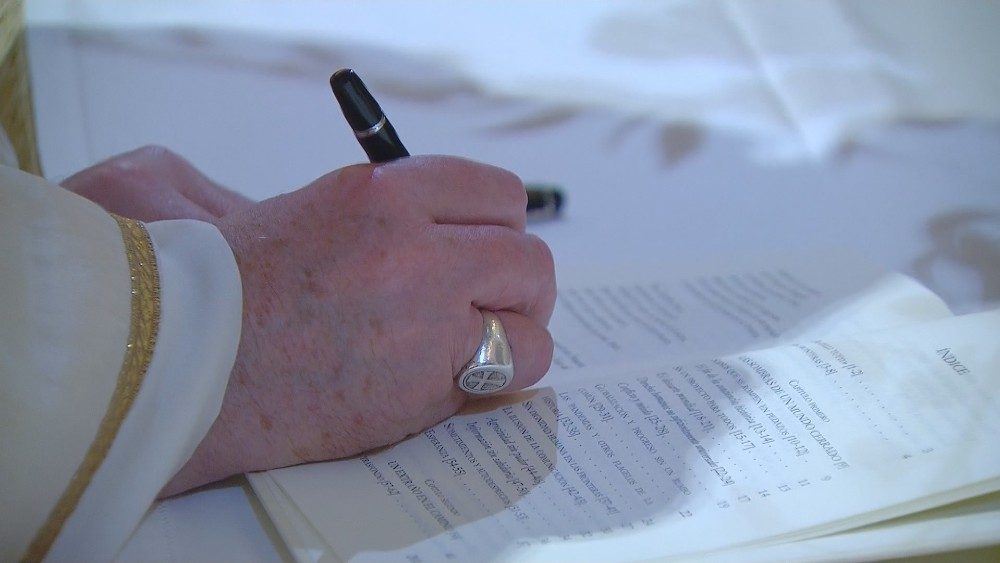