Pope Francis has responded to the U.S. Supreme Court’s decision overturning Roe v. Wade, which returned power to regulate abortion to the individual states, saying he respected the decision but had not studied it enough to comment on it from a juridic point of view.

The Pope, however, condemned abortion once again, likening it to “hiring a hit man.” “Is it legitimate, is it right,” he asked, “to eliminate a human life to resolve a problem?”

Pope Francis made the remarks in an hour-and-a-half-long interview with Reuters correspondent Philip Pullella, published on Monday.

The Holy Father also emphasized the importance of a pastoral approach to Catholic politicians who support abortion, saying, “When the Church loses its pastoral nature when a bishop loses his pastoral nature, it causes a political problem.”

The interview, conducted in Italian with no aides present, covered a wide variety of topics, including swirling rumours that the Pope might be planning to resign, possibly during an upcoming trip to L’Aquila. The Italian city, as Pullella notes, is associated with Pope Celestine V, who resigned in 1294; and with Benedict XVI, who is thought to have foreshadowed his own resignation when he laid his pallia on Celestine’s tomb during a visit to the city in 2009.

“All of these coincidences made some think that the same ‘liturgy’ would happen,” Pope Francis said. “But it never entered my mind. For the moment no, for the moment, no. Really!”

Pullella notes, however, that the Pope repeated that resignation remains a possibility, if, for instance, failing health made it impossible for him to guide the Church. However, when asked directly when that might be, Pope Francis responded, “We don’t know. God will say.”

Pope Francis denied rumours that cancer had been found during an operation last year to remove part of his colon. The Pope said the operation “was a great success” and dismissed cancer rumours as “court gossip.”

The Pope also spoke about problems with his knee, which have plagued him in recent weeks. He noted that he had suffered “a small fracture” in the knee while a ligament was inflamed, but added, “I am well; I am slowly getting better.” He explained that he was undergoing laser and magnet therapy, but that he did not want to have an operation on the knee after having a negative reaction to general anaesthetic during last year’s surgery.

Health issues with his knee forced the cancellation of his trip to the Democratic Republic of Congo and South Sudan, a trip that would have taken place this week. Pope Francis said the decision to cancel the trip caused him “much suffering,” but that doctors said if he went, he might be forced to postpone his trip to Canada at the end of the month.

The Pope also spoke about the possibility of a trip to Moscow, in the context of questions about the current war in Ukraine. “I would like to go (to Ukraine), and I wanted to go to Moscow first. We exchanged messages about this because I thought that if the Russian president gave me a small window to serve the cause of peace.”

He said a visit to Ukraine is now a possibility, sometime after his journey to Canada. However, he added, “The first thing is to go to Russia to try to help in some way, but I would like to go to both capitals [Moscow and Kyiv].”

The Reuters report on Philip Pullella’s interview with Pope Francis is expected to continue over the next two days. 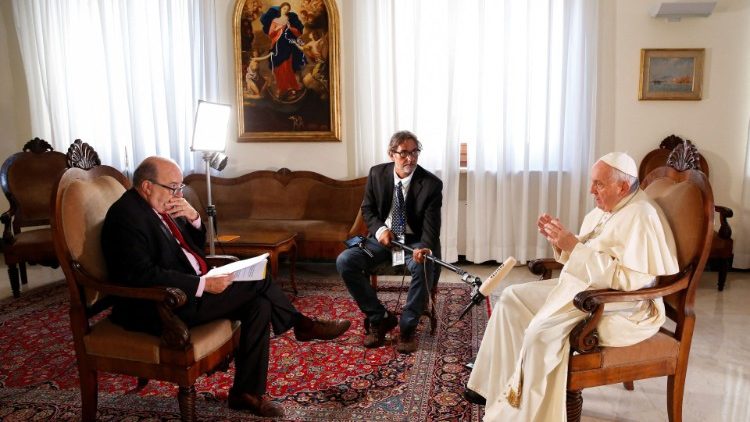