Pope Francis kicked off his Friday morning visit to the Italian town of Assisi with an unexpected visit to the Poor Clares Convent, where he met privately with the cloistered nuns serving the Church in prayer.

He then travelled to the Basilica of St. Mary of the Angels, where a poor person presented him with the pilgrim’s staff and mantle, to show that all present were pilgrims in the town of St. Francis.

The Pope then held a conversation with around 500 poor people who acted as day’s true protagonists and who hail from various European nations. Many of them are homeless, unemployed, or migrants. The trip came just ahead of Sunday’s celebration of the 5th World Day of the Poor.

The meeting was followed by a half-hour break during which those present were offered a hearty snack.

Willingness to serve others

Pope Francis and the poor returned to the Basilica for a prayer service filled with hymns and the Word of God.

Opening the service, the Pope recalled how so many saints—including St. Francis, St. Clare, and Blessed Carlo Acutis, all closely linked to Assisi—have dedicated their lives to the poor and most abandoned, following the voice of the Lord.

He prayed that everyone might “renew our willingness to dedicate this next year also to the service of those most in need.”

Ahead of the Lord’s prayer, Pope Francis said Jesus reminded his disciples in the Gospel of Mark (14:3-9) that we will always have the poor with us, “with whom we must mutually share our daily bread”, and that we must never become numb to their presence.

Hands outstretched toward the poor

The Pope prayed to God that “the freedom and bread that you provide might never be lacking, and that we might all learn to give in the manner of Him who gave Himself.”

He then extended his hands in blessing over the poor and volunteers gathered in Assisi, and prayed:

“God our Father, your Mercy is without limits;
watch over these your children so that, guided by your Word,
they may never lose sight of the path of love which passes
through the hearts of our brothers and sisters affected by need and suffering.
May your Spirit give them strength, courage, and tenacity to extend their hands
towards those who are in need.”

At the end of the prayer service, Pope Francis donated each of the 500 poor people a backpack filled with clothes, shoes, jackets, and facemasks.

He then blessed a stone taken from the Porziuncula, which will be given to a homeless shelter.

As the Pope returned to the Vatican, he stopped off at the Poor Clares Convent in the town of Spello to have lunch with the cloistered nuns living in the community.

Speaking to Vatican News about the visit, the Archbishop of Assisi, Domenico Sorrentino, praised the Pope for giving “us the poor as they are seen through Christ’s eyes.”

“Our love for those in most need must be transformed into a consistent attitude,” he said. “Charity must become our constant dedication.” 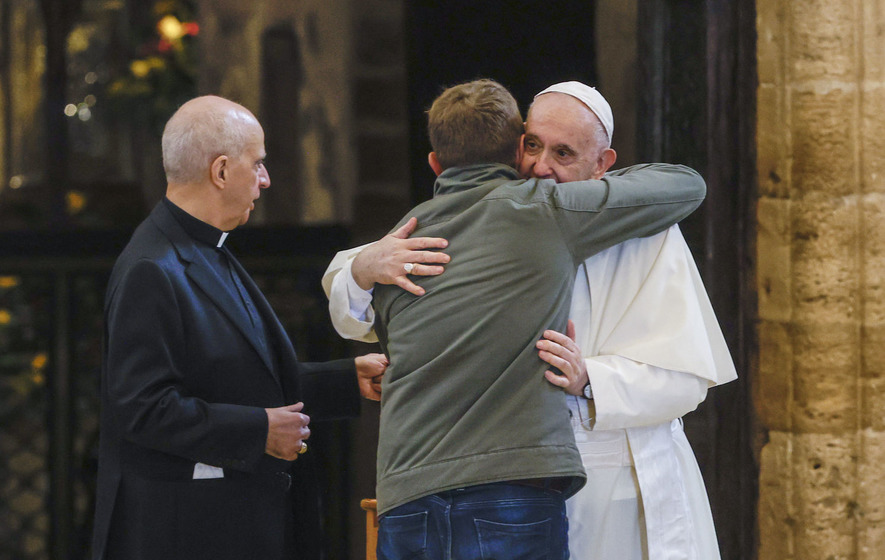