It is a task which is “particularly dear to my heart”, carried out “to promote a ‘clean finance’, in which the ‘merchants’ are prevented from speculating in that sacred ‘temple’ which is humanity.”

Pope Francis made that remark on Thursday in an address to the evaluators of the Moneyval Programme.

The Committee of the Council of Europe arrived in the Vatican on 30 September to evaluate measures against money laundering and financing of terrorism. The visit was agreed upon in 2019, and takes place in the cycle of periodic evaluations to which all jurisdictions belonging to Moneyval are subject according to a pre-established schedule.

Pope Francis recalled that “the Vatican recently introduced into its legal system measures aimed at ensuring transparency in the management of money and preventing money laundering and the financing of terrorism. On 1 June last, a Motu Proprio was issued for a more effective management of resources and for the promotion of transparency, oversight and competition in the procedures for awarding public contracts. On 19 August last, an Ordinance of the President of the Governorate required volunteer organizations and juridical persons of Vatican City State to report suspicious activities to the Financial Information Authority (AIF).”

In his speech, the Pope expressed his desire for a financial system “that does not oppress those who are weakest and in greatest need.”

He also stressed the need to “reflect anew on our relationship with money”, because “in many places the supremacy of money over human beings is taken for granted.”

“Sometimes, in the effort to amass wealth, there is little concern for where it comes from, the more or less legitimate activities that may have produced it, and the mechanisms of exploitation that may be behind it. Thus, situations can occur where, in touching money, we get blood on our hands, the blood of our brothers and sisters. It can also happen that financial resources are used to spread terror, to shore up the strongest, the most powerful and those prepared to sacrifice the lives of their brothers and sisters without a scruple, all in a bid to hold onto their power.”

Following the lead of St. Paul VI, Pope Francis reiterated the proposal to set up a global Fund to relieve the needs of the poor and hungry by “setting aside the monies spent on military expenditures.”

The Pope also recalled that the Church’s social teaching has pointed out “the error of the neoliberal dogma”, according to which the economic and moral orders are so “completely distinct from one another that the former is in no way dependent on the latter.”

“It would seem that the worship of the ancient golden calf has returned in a new and ruthless guise in the idolatry of money and the dictatorship of an impersonal economy lacking a truly human purpose.”

But the path traced by Jesus is clear, said the Pope.

“Jesus drove merchants from the temple precincts and stated: ‘You cannot serve both God and money.’ Once the economy loses its human face, then we are no longer served by money, but ourselves become servants of money. This is a form of idolatry against which we are called to react by reestablishing the rational order of things, which appeals to the common good, whereby money must serve, not rule.” 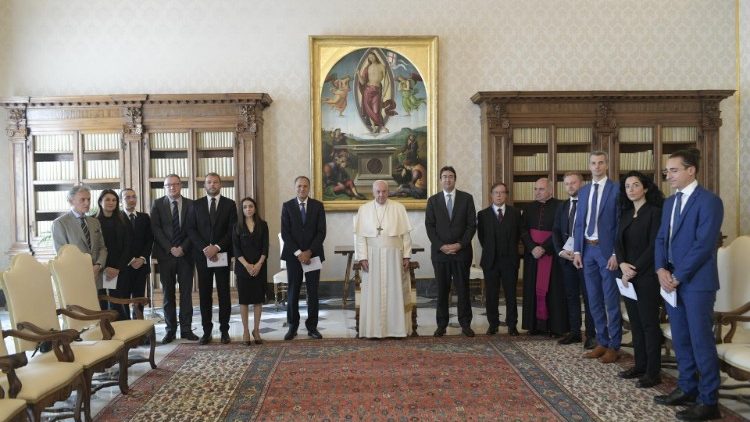