The official theme song of World Youth Day (WYD) 2023, scheduled to take place in Lisbon, Portugal, was released on Wednesday, exactly two years since the announcement of the city chosen by Pope Francis to host the next world meeting for young people.

Young people from all over the world are invited to identify with Our Lady when singing the song, “disposing themselves to serve, to the mission and to the transformation of the world” reads a statement accompanying the release of the song. The lyrics also evoke the “party” of WYD and the joy that comes from Jesus.

The theme song was recorded in two versions: one in Portuguese and the other in an international version that includes Portuguese, English, Spanish, French and Italian.

Chosen from among many

The lyrics to the WYD 2023 theme song were authored by João Paulo Vaz, a priest, while the music was composed by Pedro Ferreira, a teacher and musician, both from the Diocese of Coimbra in the center region of Portugal. The musical arrangements were made by the musician Carlos Garcia.

“Há Pressa no Ar” was selected through a national contest open to the participation of Portuguese people of legal age. Participants in the contest were required to take their inspiration from the WYD 2023 theme, set by Pope Francis; the aims of WYD, highlighting the theme of evangelization; and the Portuguese culture.

The over one hundred entries that were sent in to the Local Organization Committee (LOC) were evaluated by a jury of Arts and Music professionals. The producing process was completed in 2021 with the participation of young people from all over the country, as well as some participants in the competition who, despite not being selected, were involved in the final recording.

One song to gather many

The authors of the theme song insist that the “melody was born before the lyrics.” Pedro Ferreira, 41, composed a melody “thought to congregate, to gather a community” in a small room alone by the piano. Alongside some other friends from the “Parish Band,” his musical group, Ferreira asked Fr. João Paulo Vaz to write the lyrics.

Fr. Vaz recalls not changing the melody. With “a guitar in my hands, I started writing, just like I usually do,” said the 51-year-old priest.

The song style is “a popular song, cheerful, young, easy to learn and easy to translate and to adapt” according to the requirements of the national contest. Ferreira says that musician Carlos Garcia, the one behind the musical arrangements, did a remarkable job of not changing the song’s structure or form, yet enriching it uniquely. Ferreira is also the founder of the Portuguese band “Anaquim.”

Fr. Vaz recalls that the theme of the Portuguese edition: “Mary rose up and went with haste” (Lk 1:39) helped him revise his own relationship with Our Lady, and then the lyrics creative process became “a very deep time of praying.”

For more information, you can visit the official website of WYD 2023 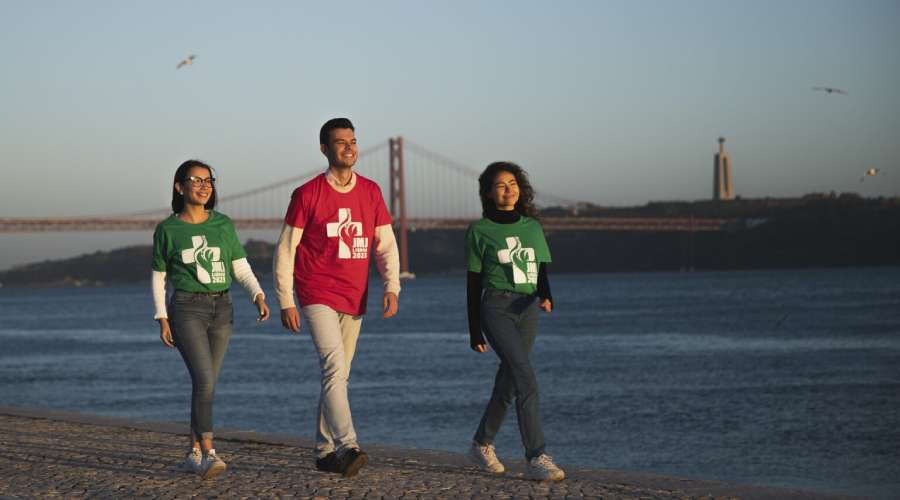