These themes related to the life of every family across the globe form the basis of the meditations written for the Via Crucis which Pope Francis presides over on Good Friday at the Colosseum in Rome.

Fifteen families linked to Catholic volunteer associations and communities wrote the meditations since this year marks the Amoris Laetitia Family Year celebrating the fifth anniversary of the Pope’s Apostolic Exhortation.

The order of the meditations partially reflects the progression of family life, moving from the financial difficulties of young couples to the trials of parenthood and from the pain of loss to extraordinarily difficult situations like war.

A young couple kicks off the Way of the Cross reflecting on their difficulties, which include seeing their friends’ marriages fail, their love as yet untested by trials, and their struggles to make ends meet. “Marriage,” they say, “is not only a romantic adventure; it is also Gethsemane: the anguish we feel before breaking our body for the other.”

A missionary family then shares their difficulty in trusting Divine Providence, as they witness the horrors of war and are tempted to turn to violence in response. Yet, they daily struggle to resist the temptation to betray Christ in His brothers and sisters.

Love without and with children

An elderly couple without children offers the reflection for the 3rd Station, pointing out how often they have experienced the condemnation of others who judge them for their sterility. Love, they add, fills their family as they walk hand-in-hand.

A family of many children shares the opposite point-of-view, noting that personal projects and career goals often give way to family duties, even if unbidden. “Despite our worries and our very full days,” they say, “we would never  think of going back.”

Another couple says their son with a disability was judged even before he came into the world, since doctors told them he would be “a burden to you and society: ‘crucify him’.” But he had done nothing wrong, and they chose life.

A family which has turned their house into a home for many others points out that pain has the power to change us and remind us of the simplicity of human dignity.

A man whose wife was diagnosed with a terrible illness offers a reflection on the 7th Station. Unexpected illness, he says, put him and his wife on the cross but also made them the bedrock of their family.

Two grandparents compare their situation—with a live-in daughter and 5 grandchildren due to a failed marriage—to that of Jesus helped to carry His cross by Simon of Cyrene. “Our steps falter and at night, after having laughed, we find ourselves weeping with compassion.”

A couple who adopted two children points out that adoption is always the result of a child being abandoned, and that this situation leaves a wound that will forever bleed. “But this cross, even if it is painful,” they add, “hides a secret happiness.”

A widowed mother with two children shares her pain for the 10th Station, and wonders aloud why Jesus “if He is the Son of God” did not save her husband. Yet, she notes, “Love becomes real, because even in our abyss and discomfort we are not abandoned.”

Two parents whose son is a consecrated religious share their incredulity and difficulty accepting their son’s vocation, admitting that they had abandoned him to his choice. Though their attitudes have changed, they still ask Jesus to remember them when He comes into His Kingdom.

As Mary watched her Son on the cross, another mother stood by silently as her young daughter—and then her own husband—died at a tender age. She shares the pain of seeing her family transformed, and recalls the only words that have given her some semblance of strength: “God does not call those who are strong, but He strengthens those whom He calls.”

The 13th Station meditation was penned by a pair of families who from the current political point-of-view should have nothing to do with each other: one hails from Ukraine and the other from Russia.

Yet, together they have written about the pain of death and destruction—how life seems to lose meaning and hate gives way to hopelessness and silence—and together they carry the Cross of Christ for the Station that marks His own death.

Migrants hoping to see the light of day

The reflection for the 14th and final Station of the Way of the Cross comes from a family who have become migrants due to war.

At home they were important; now they are just numbers and categories. Even being Catholic seems to take second place to being migrants, and so they die each day so that their children have the chance of a life without bombs, blood, and persecution. 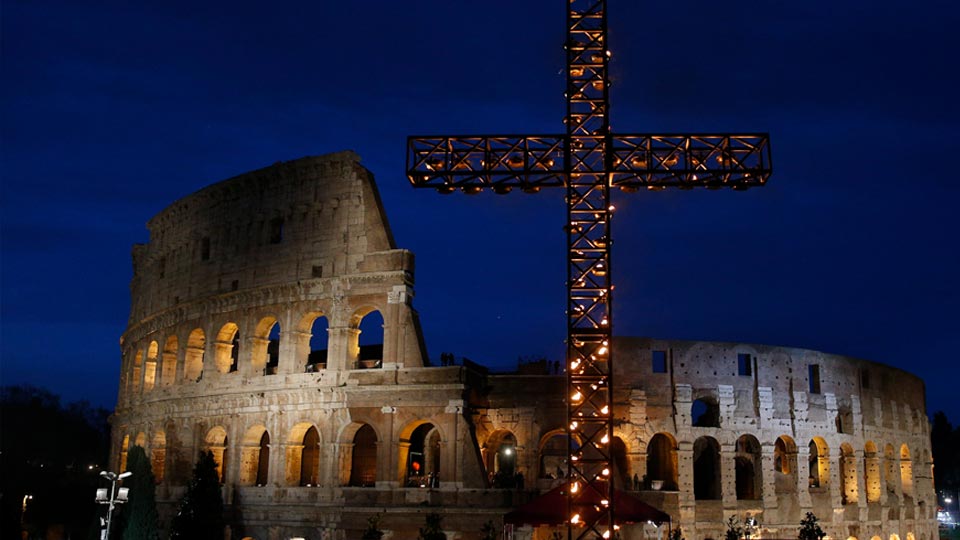