“After we had reached safety we learned that the island was called Malta. The natives showed us unusual kindness” (Acts 28:1-2). In this week of prayer for Christian unity in this year of our Lord 2020, we Christians have been invited to meditate, pray and reflect on this verse 2, chapter 28 of the Acts of the Apostles. We Maltese are called barbaroi by Luke in the Acts of the Apostles and scholars tell us the reason we are called barbaroi, which does not necessarily translate as barbarians, is the fact we were neither Latins and we did not speak Greek. But we were still in AD 60 in a very much Punic culture, speaking a Punic or semitic language, which is a thing that we still do, which I say with certain affect.

That brings me to the fact that our island is called Malta. We call ourselves that the Punic or semitic root for malat means ‘safe haven’ and it is very appropriate that the first parish in Valletta, exactly dedicated to our Lady of Safe Havens: La Beata Maria Vergine del Porto Salvo, because that is also reminiscent of the meaning of the name of our island, of course with melita on them in the Greek and Latin traditions, it was almost always linked to honey, the land of honey. And so it is also a promised land – a safe haven which is a promised land.

But what is a safe haven? What is the promised land without people who show the kindness that makes the safe haven what it should be, a truly safe haven? The word in the original Greek for kindness is filantropia and this kindness, this filantropia was translated by Jerome to the lingua vulgata, the Latin that the people used to speak when he was translating the Bible from the original languages, he translated filantropia as humanitas. And this is the attitude that our forebears showed not only to the apostle Paul and Luke, his companion, but also to the whole group of shipwrecked people that according to chapter 27 of Acts were 276 in all.

The Maltese lit a fire because it was very cold, it was raining (Acts 27:2). This unusual kindness is a challenge to us today. We need to ask ourselves: are we living to this high ideal of showing kindness to one another? And today in the context of prayer for unity among Christians, we need to ask ourselves: do we show kindness to each other? And what does showing kindness to each other mean? I think first of all, true kindness will respect the truth about each other, facing the facts, even if they are not really the best news we would choose to present. Being true to our past whether it is an enlightened past with some darkness in it, whatever it is, being true to our past is I think the first test in showing true kindness because true kindness should also be accepting the others as they are. We all know that we are sinners and have baggage that we are afraid to show to other people but the Lord has chosen us, weak men and women, so that he may be able to show his infinite patience and mercy.

A word which appears in the narrative of the shipwreck is the word protos. It is used for the chief of the Island, Publius, but in another text from Timothy, Paul himself calls himself protos and he uses this to explain that he is, among sinners the protos – the chief sinner. And he explains that although he is a protos amongst sinners, he has been chosen for a special mission and this special mission is to be an example of the infinite mercy and infinite patience of Jesus Christ: “So that, through me” he says, “the followers of Jesus may take courage, may not despair of their sins, may trust in the infinite mercy of Jesus”.

We leaders of Christian communities around the world, we Christians need to embrace each other knowing that we are an extraordinary example of how patient Jesus is. He is really patient with us. It is his family torn in a hundred pieces, when towards the end of his earthly life, he prayed for unity and look at what we have done to the garment and fabric of the Church, that he still shows infinite mercy. And this infinite mercy is also an expression of his patience and endurance.

The Maltese show this unusual kindness before they were evangelized. In the context of the shipwreck narrative, their unusual kindness is a pre-Christian virtue, it is a fundamental human virtue. It then becomes more beautiful, it becomes evangelized when they meet the healing touch of the apostle who brings salvation – salus health – in the name of Jesus.

In the narrative we do not have lots of dialogues, we have the things that the Maltese were sharing in gossip. We all know that we are very good at it, and there were noticing what was happening, and were saying: ‘no this must be a murderer, let’s wait until he sort of pops off and drops dead’. And then they go from one extreme, thinking that he is a murderer to the other extreme, thinking that he is a god, typical Maltese. But we have so many quotes from Paul in Acts, he is always speaking he does not seem to shut up. But on Malta Paul does not say anything at all, his mission is in gestures and powerful signs of the spirit, because the first impact is actually the fulfillment of the prophecy by Jesus when he tells the disciples that there will be signs that will accompany those who believe. This comes from the Gospel that has just been read today. “By using my name they will cast out demons, they will speak in new tongues, they will pick up snakes in their hands, they will lay their hands on the sick and they will recover” (Mk 16:18).

When we look at the signs that Jesus mentions in Mark 16, we realize that the narrative of the three months that Paul spent among us is actually a fulfillment of the presence of Jesus Christ in his spirit through the liberation from evil – and that is the viper biting the hand of the apostle, and also healing. And we all know that after the healing of the father of the protos, of Publius, Acts of the Apostles says that the rest of the population of the islands brought their sick to Paul (Acts 28:9). I do not think it some of the sick, but it said that after this happened, the rest of the people on the island who had diseases, also came and were cured. I do not think there were any sick people on the island for some time after this and some say that it was the beginning of a free health service: that you go to the apostle and you get healed.

But this was a very special moment where all the families that had sick people were touched by the healing power of Jesus Christ. So we can imagine the extraordinary effect of the name of Jesus bringing healing to all the sick people of the islands. The enormous effect on the sons and daughters of parents who were sick and dying, or parents of their children who were sick, and these people are healed in the name of Jesus. Don’t we all need a healing of memories in our ecumenical endevours? We need to pray as we try and try hard to show kindness to each other, a healing of memory and this will only happen through the power of the spirit of Jesus Christ, who is calling us to look at what really unites us – our faith in Jesus, our faith in God who is love, God the Father, God the Son and God the Holy Spirit.

We are today committed to show kindness to each other not only by words but rather by deeds as the apostle Paul preached Jesus through his gestures, through his trust in the power of God to whom he belonged and whom he worshipped. That is what he said on the ship: “An angel of God appeared to whom I belong and whom I worship” (Acts 27:23). Do we belong to God? Are we living our Baptism? We were evangelized we Maltese by an apostle who was baptised in the name of God the Father, the Son and the Holy Spirit in Damascus. The one who baptised him was called Hananias, the Lord is merciful, that is the meaning of the name ‘Hananias’. And when he says that he belongs to this God who is love, he is referring to this radical dedication, consecration that unites us as Christians. There is one baptism, one Lord, one Spirit so the kindness we show each other has a sacramental basis; it is not only the filantropia of a pre-Christian courtesy, which at times we also lack unfortunately, but it is an evangelized filantropia, it is a filantropia that is based on the filantropia that God shows us in the mystery of his Son becoming man, becoming Jesus. God saves, becoming Emmanuel, God is with us.

And this is the great mercy and the great patience that the Lord wishes to manifest to us today as we contemplate on the goodness of the islanders 2,000 years ago. But we cannot rely with a sense of nostalgia nationalistic or patriotic pride on the laurels of our forebearers but that heritage needs to knock on the doors of our consciences. Are we showing kindness to one another? Are we showing kindness to people who knock on the doors of our shores? What kind of humanitas, filantropia are we showing people who cross the blue desert, the Mediterranean Sea on rafts, dinghies, – lost. Some of them do not know how to swim, seeking a modicum of dignity. If we are called to show kindness to others, and we are called to show kindness to ourselves, to each other, then this kindness needs to be a way of being, an atittude that informs our life and our spirits.

Let us ask for the healing of memory but also for the healing of all temptations to simply think about what is the best for us without caring for the needs of others. There is a narcissism in our culture that desperately needs healing, we need the healing touch of Jesus. And so we pray through the intercession of Paul, our father in faith, that we may continue to show that “unusual kindness” which impressed Luke so much and which makes us truly proud. 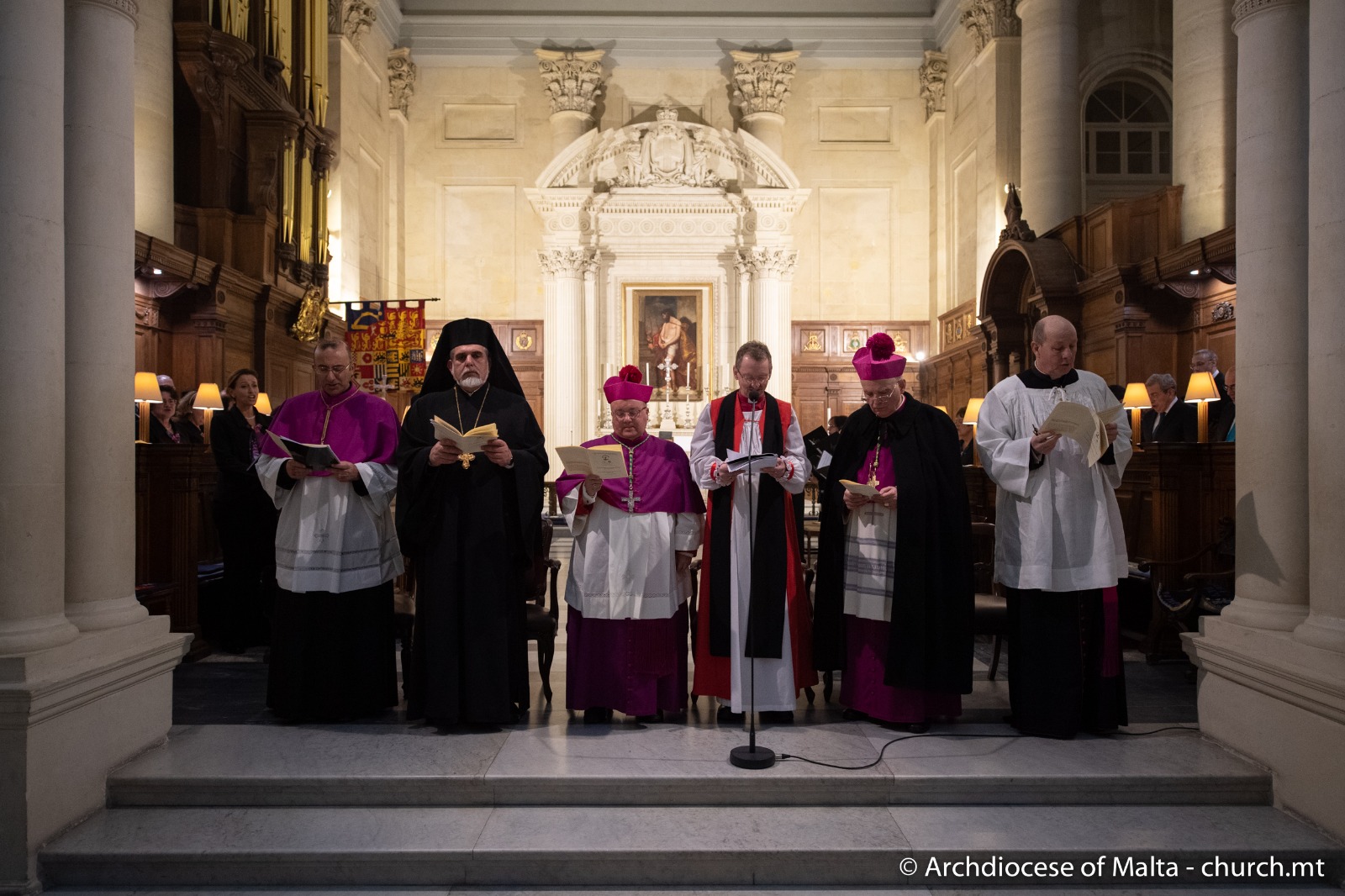