Addressing the humanitarian needs that emerged at the end of World War II and assisting the victims of the conflict. When Pius XII established it on December 12, 1951, these were the main objectives of Caritas Internationalis, a confederation of national Caritas organisations – which has grown from the initial 13 to the 162 of today – that, in the course of these 70 years, has increasingly broadened its range of action and multiplied its sectors of intervention. At the centre, today as in the beginning, is the concrete witness of charity so that people – especially the most vulnerable – can experience God’s merciful love. Today Caritas Internationalis announced the programme of events and initiatives that will mark the 70th anniversary of its birth. It was an opportunity to talk with its General Secretary Aloysius John about the challenges facing Caritas in the future, starting with the global humanitarian crisis triggered by the pandemic.

A few years after the end of the Second World War, Caritas Internationalis was born. Seventy years after its foundation, what are the values that sustain your Confederation today as they did then?

Caritas Internationalis was born as “the caring and loving hand” of the Church to serve and promote the human person and, in particular, the poor, the marginalised, and the most vulnerable in society. During these 70 years, our Confederation has been guided by founding values such as the protection of human dignity, fundamental rights, and social justice. These values have always remained the foundation of our work, which has evolved over the years, following the signs of the times and seeking constant development to better serve our neighbours in need. At the heart of our mission is, and always will be, the encounter with the poor, as Pope Francis also reminded us in 2019 at our last General Assembly. “One cannot live charity without having interpersonal relationships with the poor,” he told us, “Because by living with the poor, we learn to practice charity with the spirit of poverty. We learn that charity is sharing”.

In these 70 years, Caritas Internationalis has been present in all the great humanitarian emergencies. What do you think is the biggest challenge you face today in a world marked by rapid and profound transformations?

Humanitarian work has changed significantly since 1951, and today we are faced with complex and long-lasting crises, both natural and man-made. Political divisions, wars, and religious conflicts are mixed with the effects of climate change resulting in a dramatic increase in refugees and internally displaced persons. We also face severe inequalities and the emergence of new forms of poverty and vulnerability. As we continue to serve and accompany those affected by such suffering, we face the challenge of fostering within our modern society a sense of solidarity with them. On the other hand, in the face of immense human suffering, the most urgent challenge is to mobilise the resources necessary to carry out our mission.

COVID-19 has also put a strain on charitable and humanitarian activities. How did Caritas Internationalis deal with the crisis, and how is it preparing for the post-pandemic period?

Our Confederation was faced with an unprecedented crisis that saw almost all Caritas worldwide engaged in responding to the pandemic. A concrete sign of support and hope came from the Holy Father. He wanted to include Caritas Internationalis in the Vatican COVID-19 Commission. At the behest of the Pope and in collaboration with the Dicastery for the Promotion of Integral Human Development, we set up a fund to support 40 Caritas projects. This gesture of solidarity has motivated other local actors to join Caritas in offering support. In Bangladesh, for example, Muslim restaurant owners supported the local Caritas organisation by donating food for refugees. The immediate response to the emergency was simultaneously accompanied by reflection on the future. Spurred on by Pope Francis’ invitation to ‘think about the new future of the post-pandemic, we have created a think tank and are reflecting on how the work of Caritas will be affected by the new reality.

The Church is globally engaged in the synodal process desired and initiated by Pope Francis. What is the contribution that a global ecclesial reality like Caritas Internationalis can offer to synodality?

Pope Francis stressed that the synodal process, which involves the whole Church, has listening as its first point. The ability to imagine a new future for the Church depends to a large extent precisely on initiating a process of listening, dialogue, and community discernment. Caritas Internationalis can consequently help bring its contribution to reflection within Christian communities at a grassroots level and in parishes, first and foremost by promoting dialogue and solidarity with the most vulnerable within them.

An anniversary is an occasion to take stock but also to relaunch. What will Caritas Internationalis focus on in the coming years? Is there a particular campaign you are launching for this anniversary?

This pandemic has shown us that we will all become more and more vulnerable without care for humanity and Creation. Today the world needs more than ever a radical conversion of hearts and minds, and reconciliation with Creation. As we carry out our charitable work, we are particularly committed to promoting a civilisation of love and care for humanity and our Common Home. It is on these points that our Global Campaign, which we will launch on the occasion of our anniversary and which will run until 2024, will be based. 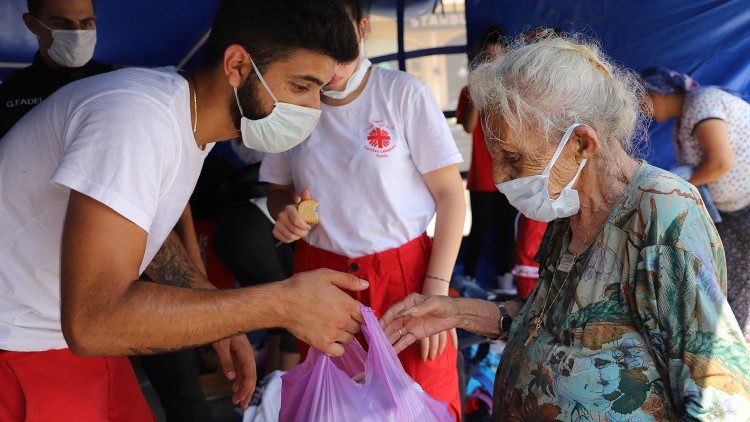