Thousands of pilgrims welcomed Pope Francis as he joined their annual pilgrimage to the sacred shores of Lac Ste. Anne, on Tuesday afternoon, local time.  The lake called Wakame (“Lake of God”) by the Nakota Sioux and “Lake of the Spirit” by the Cree people is renowned for its healing waters and for its spiritual significance both to Catholics and Indigenous Peoples in Canada and Northwestern United States.

It was named after St. Anne, the mother of Mary and grandmother of Jesus, by a Quebecois Catholic missionary, who launched the pilgrimage in the late 19th century, celebrating the week of her Feast Day, on 26 July.

Returning to the sources of our faith

After blessing the water of the lake and the faithful present with it, Pope Francis presided over a Liturgy of the Word.  The Holy Father started his homily, noting that the beating of drums introducing the celebration “seems to echo the beating of the hearts” of the many pilgrims who for generations have walked together to reach this “lake of God”, seeking healing from its waters.

The Pope further remarked that silently contemplating these waters where “the maternal heartbeat of the earth” can be sensed, inspires us to return to the sources of life and of our faith.  “Indeed –  he said – it allows us, in spirit, to visit the holy places, to imagine Jesus, who carried out much of his ministry on the shores of a lake: the Sea of Galilee”.

God chose the richly diverse context of this peripheral area where various peoples converged, to announce to the world his “revolutionary” message of fraternity.  That message,  the Pope said, resounds today in the sound of drums spanning the centuries and uniting different peoples. “It reminds us that fraternity is genuine if it unites those who are far apart, that the message of unity that heaven sends down to earth does not fear differences, but invites us to fellowship, in order to start afresh together, because we are all pilgrims on a journey.”

Focusing on the readings of the Liturgy drawn from the Book of Ezechiel (Ez 47, 1-2. 8-9. 12), Pope Francis reiterated the crucial role of grandmothers, specifically in indigenous communities, in transmitting the “living water of faith”. “Faith rarely comes from reading a book alone in a corner”, said the Pope,  “instead, it spreads within families, transmitted in the language of mothers, in the sweetly lyrical accents of grandmothers”.  While thanking them for their precious role, he reiterated his call on families to cherish and take care of their elders.

Pope Francis then focused on the healing power of water in the context of the injuries suffered by the Indigenous Peoples of Canada after the European colonization. Recalling Jesus’ ministry on the shores of the Sea of Galilee, he implored the Lord, through the intercession of Mary and of Saint Anne, to help heal those deep wounds.

The role of grandmothers in the healing process

Pope Francis, again, emphasized the role of mothers and grandmothers in the Indigenous communities also in helping to heal those wounds, referring specifically to the figure of the grandmother of God, who was introduced to the Indigenous Peoples in Canada by the missionaries through an effective process of inculturation.

He recalled that part of the “painful legacy” of European colonization “stems from the fact that indigenous grandmothers were prevented from passing on the faith in their own language and culture”.  “That loss – the Pope said  – was certainly tragic, but your presence here is a testimony of resilience and a fresh start, of pilgrimage towards healing, of a heart open to God who heals the life of communities”.

All the Church needs healing

Pope Francis then remarked that today, “all the Church needs healing”, inviting the pilgrims to contribute to the building up of “a Mother Church” capable of “embracing each of her sons and daughters”, that “is open to all and speaks to everyone”,  and  “encounters everyone”. He further emphasized that “if we want to care for and heal the life of our communities, we need to start with the poor and most marginalized”, including the elderly who risk dying alone, but also young people “who are more interrogated than listened to”.

Pointing out that Jesus calls us to “to go out, to give, to love”, he invited all the faithful to ask themselves what they can do for those in need, and specifically for the Indigenous Peoples who have endured so much suffering.

Indigenous Peoples a treasure for the Church

In his final words, the Pope expressed hope that the Church may advance helping the healing process of the Indigenous Peoples of Canada, reiterating how precious they are to him and the Church. 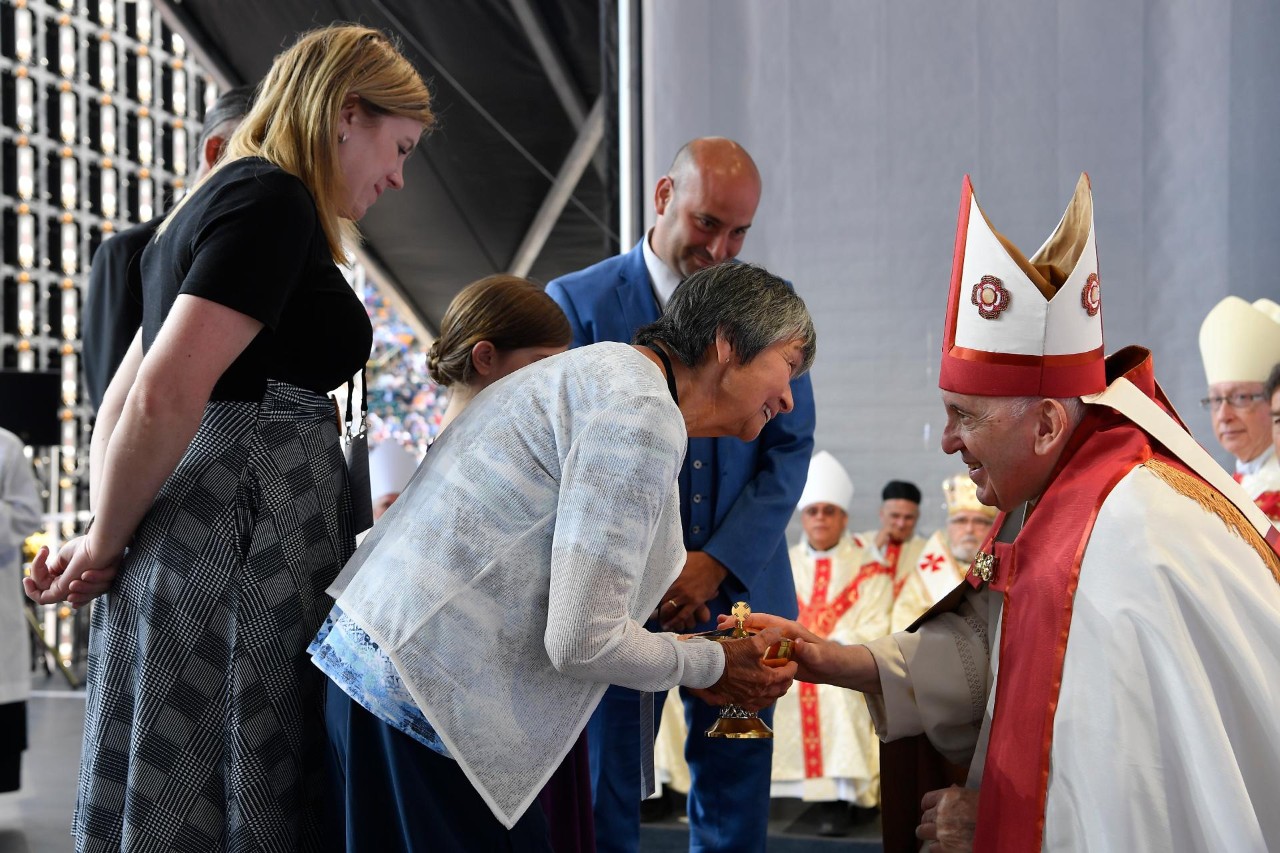