The second leg of Pope Francis’ ongoing “Penitential Pilgrimage” has brought him to Québec City, where he will remain till Friday when he leaves for Iqaluit.

On Thursday evening, the Holy Father is scheduled to preside at Vespers with the Bishops, clergy, consecrated persons, seminarians and pastoral workers at the Notre Dame de Québec Cathedral.

As the Cathedral prepares to receive the Pope, Fr. Jimmy Rodrigue, Notre Dame’s Rector, shares his thoughts on the Pope’s presence in the country and his message of healing and reconciliation for the Indigenous peoples.

Speaking to Vatican News’ Silvonei Protz, Fr. Rodrigue describes the Pope’s visit to the Cathedral of Québec as a “deeply meaningful moment” and “an act which will be accompanied by words.”

The Cathedral’s Rector insists that the words which the Holy Father will speak have to be received with a “careful and deep attitude” in order to further foster communion.

He further stresses that this is the “principal attitude” needed in order to be ready to embrace directions for new creativity in ministry and actions with Canada’s Indigenous peoples.

Although the Vespers in the Cathedral is primarily for the Bishops, clergy, religious and pastoral workers in Québec, Fr. Rodrigue says that it is also for “the whole Church in Canada.”

Pope Francis is expected to give a homily at the Thursday evening event.

“It will be a sign, a very beautiful sign of communion to receive together, the words of the Holy Father,” Fr. Rodrigue says, adding that he hopes that it will provide “strength to see the future with hope.”

In the priest’s opinion, the Pope’s presence in Canada is essential as it provides him with the opportunity to be more aware of the situation, as regards the sufferings inflicted on Indigenous peoples and the forced assimilation they endured in the residential school system administered also by some local Church institutions in the past.

On Monday, Pope Francis apologized to Canada’s Indigenous peoples, saying that he has come to their land in person to express his closeness to them and to “implore God’s forgiveness, healing and reconciliation.”

Fr Rodrigue expressed hope that the Pope’s Apostolic Journey will create “better fruits for communion and for welcoming each other.”

Notre Dame of Québec is the oldest Church in Canada and is recognized as one of the country’s historic monuments.

In 1664, it became the first parochial church north of Mexico and was dedicated to Our Lady of the Immaculate Conception. In 1674, it became a cathedral following the appointment of St. Francis de Laval as the first bishop of Québec City. Two hundred years later, Pope Pius IX elevated it to a Basilica.

The Cathedral houses the tomb of St. François de Laval, a large reliquary of Canada’s Saints and Blesseds, and is adorned with a Holy Door which was installed in 2014 on the 350th Anniversary of Notre-Dame de Québec Parish. 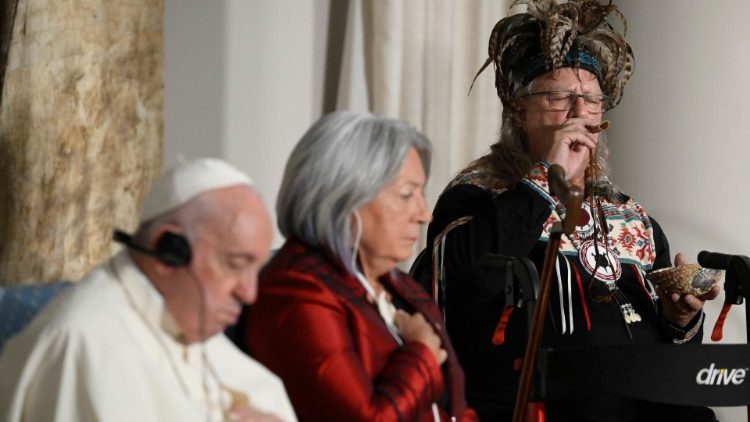