The solitude and isolation of men and women across the world, cut off from their families and friends, deprived of their work and livelihoods, living in fear of an uncertain future for themselves and for their children, were poignantly present during the “Way of the Cross” on the second day of the Easter Triduum 2021.

For the second year in a row, Pope Francis led the traditional Good Friday Via Crucis in a near-empty Saint Peter’s Square due to restrictions put in place by the Italian government to curb the spread of the Covid-19 pandemic,

A lonely figure in white, seated at the centre of a bare stage set up in front of the Basilica, the Holy Father looked over the darkened Square where few children, accompanied by their parents, catechists and teachers, took it in turn to carry the cross around the obelisk.

One after the other, they read their reflections while their companions carried the Cross along a circular path marked out by burning torches on the ground at the centre of the Square.

The Pope, in fact, this year chose to entrust children and young people – symbols of hope and of future – with the preparation of the meditations for the 2021 Via Crucis.

The Via Crucis tradition

For over 50 years, since Pope Paul VI revived the ancient “Via Crucis” tradition in 1964, Popes have led this powerful rite that re-enacts the passion and death of Jesus Christ against the backdrop of Rome’s Colosseum. Since the beginning of the Covid-19 pandemic last year, restrictions put in place to curb infections have impacted all public events, including this one. It is, however, broadcast and streamed to a global audience of hundreds of millions on all continents through Vatican media.

Each station began with a reading from the relevant passage from the Gospel account of the passion, followed by a meditation. This was followed by the reading of a prayer by the Pope and the singing of a hymn.

No need for words

Pope Francis, it was clear, felt no need for words, and did not deliver a homily.

Silence and contemplation of the crucifix were the most powerful means of communication in a silenced world in which the virus continues to bring grief and solitude, and where marginalization, unemployment, poverty, injustice and the “virus” of indifference continue to wreak death and despair.

Children: hope for the future

During the 14th and last station it was highlighted how children and young people hold the key and the hope for rebirth: “Lord, merciful Father,” the prayer read, “once again this year we have followed your Son Jesus on the way of the cross. We followed him by listening to the voices and the prayers of the children whom you yourself set before us as the model for entering your kingdom.”

Help us to be like them: little, in need of everything, open to life. May we regain our purity of heart and our ability to see things in a clear light.

We ask you to bless and protect every child in our world. May all children grow in wisdom, age and grace, and so come to know and follow your special plan for their happiness.

Words were clearly redundant for Pope Francis tonight: A lonely prophet in white at the centre of a vast and darkened stage, the Pope bestowed his Apostolic Blessing, thanked the children for their reflections, and slowly made his way, on foot, back into the Basilica. 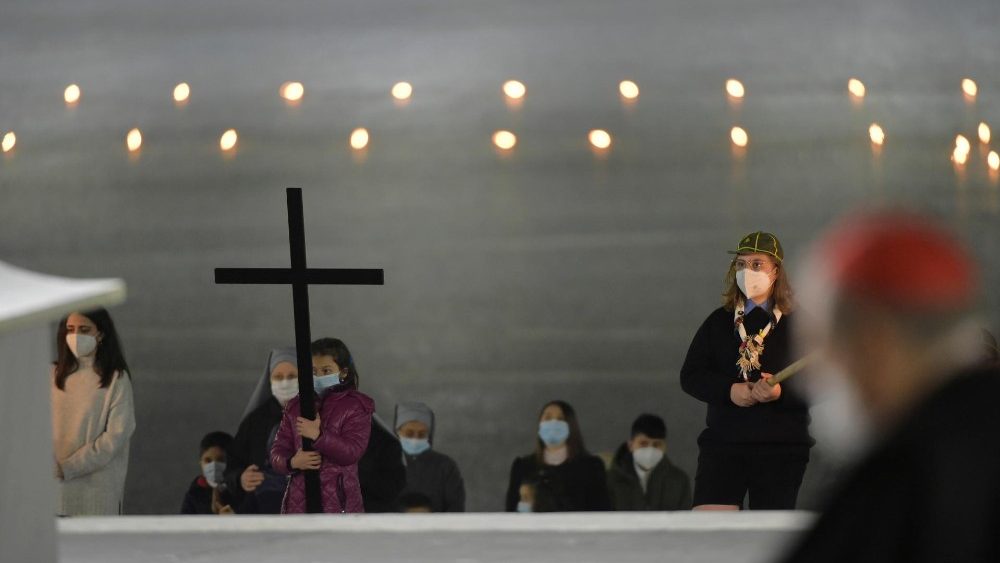